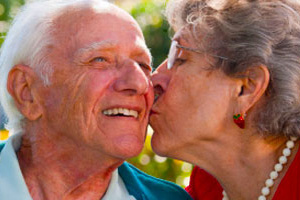 Henry taught high school maths for more than 40 years. For decades, Henry also painted large canvases of the local New England countryside. Upon retirement, he passionately concentrated on his hobby and became well regarded as a talented oil painter. He and Rita, his wife of 50 years, were living their dream. Then Rita noticed a difference in Henry. He would sit staring at his easel for long periods of time without painting. He seemed forgetful. He didn't have the sharp wit that made him a favourite with students throughout his teaching career. Rita took Henry to the doctor, who performed a series of tests. The doctor told Rita and Henry that he suspected Henry had Alzheimer's.

Henry's cognitive functions declined rapidly. Rita couldn't keep up and soon became overwhelmed. She had difficulty dealing with the change in their relationship – from loving spouse to primary caregiver. She called Right at Home and was introduced to Shelly. While at Henry and Rita's house, Shelly takes over the most stressful tasks for Rita – like bathing and toilet assistance. She occasionally vacuums, dusts and does the dishes. This gives Rita the time to get a break from her caregiving duties. She has lunch with her friends every week, goes shopping with a friend after church on Sundays and gets her hair done regularly. She also has the time and peace of mind to sit quietly with Henry, hold his hand and reminisce about their life together.

Right at Home provides numerous special care, homemaking, and hygiene services to Henry and Rita, including:

At Right at Home our priority is the health and wellbeing of our caregivers, clients and community.

We continue to monitor and follow guidelines set by the Federal Department of Health, the World Health Organisation and local and state health agencies.

We have the capability and know how to offer you assistance in your home now. Should you need assistance please contact your Right at Home local office.

Go to our COVID-19 update page.