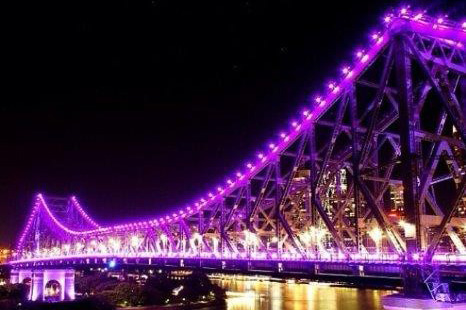 The office of the Minister for Disability Services, Minister for Seniors and Minister Assisting the Premier on North Queensland, The Honourable Coralee O'Rourke, tonight issued a press release highlighting the purple illumination of the Brisbane landmarks of Parliament House, Kurilpa Bridge, City Hall, Story Bridge and King George Square tonight and every night this week to help raise awareness for World Elder Abuse Awareness Day (WEAAD).

Seniors Minister Coralee O'Rourke said the lighting of the landmarks supported the Palaszczuk Government's call for communities across Queensland to join the fight against elder abuse, and that it would help create awareness of the growing issue.

"World Elder Abuse Awareness Day is an opportunity for Queenslanders to stand together and voice their opposition to elder abuse in our communities," Mrs O'Rourke said.

"Sadly, older people can be vulnerable to abuse, with more than 1350 new elder abuse notifications in Queensland in 2015 – up from around 1280 in the previous year.

"Whether it's physical, emotional or financial, it's a form of domestic abuse that is often hard to recognise and goes unreported."

"Our campaign makes it absolutely clear there is never an excuse for elder abuse, by highlighting the types of excuses perpetrators commonly use and what actions the community can take to prevent it," Mrs O'Rourke said.

"It was developed after a key recommendation from the landmark Not Now, Now Ever report highlighted the growing need for government to step up the fight against elder abuse.

"Throughout June, this important campaign will be promoted in shopping centres, licensed venues and medical centres, on buses, and via digital and social media advertising – to ensure everyone sees the message.

The Queensland Government also announced in their Budget yesterday that they were injecting $900,000 per year over three years starting in 2017-18 to expand the Seniors Legal and Support Services and the Elder Abuse Prevention Unit's services. The government recognizes that older people are valuable members of our communities, and announced they will not tolerate any form of elder abuse

Caxton Legal Service Director Scott McDougall said as the aging population increased and considerable wealth was held in the hands of older Queenslanders, addressing elder abuse needed to be a major priority.

"World Elder Abuse Awareness Day is a call-to-action for individuals, organisations, and communities to raise awareness about the abuse of elders and how best to respond," Mr McDougall said.

The Minister said that "Elder abuse is everyone's business and I'm pleased that the Queensland Government recognises this, by calling out the excuses perpetrators use to justify their behaviours."

For more information about the campaign, visit www.qld.gov.au/noexcuseforelderabuse

Right at Home Australia is your local expert for issues related to caring for your loved one and is dedicated to keeping you informed about home care. Right at Home offers in-home nursing, care and assistance so your loved one can continue living independently and enjoying a vibrant life. Our nurses and caregivers are screened, trained and insured prior to entering your home so you can trust us with the caregiving while you focus on your loved one.